As the anti-coup protests continue, where are the Myanmar monks?

1981 Springbok Tour 40 years later: Activists on how the protests have shaped their lives and Aotearoa

Friday for the future: Global climate strike could help youth movement bounce back from pandemic

CHIANG MAI, Thailand – In the days following the February 1 coup in Myanmar, social media was teeming with scenes of angry protesters and brutal security forces. Among them were images of Buddhist monks, often standing in silence with candles or marching with placards denouncing the army.

But the monks played a much smaller role in the events of 2021 than in previous anti-military protests, when they were often on the front lines, reflecting their deeply entrenched role in the lives of the Burmese people and their sympathy for it. popular opposition to the military, which has held onto power for most of the past six decades.

The monks were key participants in the tumultuous anti-regime uprising of 1988, for example, and were among the leaders of the “Saffron Revolution” of 2007, so named for the color of their robes. Although Buddhist clergy are urged to avoid involvement in world affairs, their political activism dates back to the struggle for independence from the United Kingdom in 1948.

This time around, however, Myanmar’s half million monks failed to respond with a united front to the army’s ousting of the democratically elected civilian government, as a result of which more than 1,000 people were killed. .

Few saffron robes were seen among the mass of protesters, and a relatively small number of monks were among the thousands of civilians detained in the months following February 1. Some prominent monks have remained silent or even declared their support for the military regime. . Fundamental and purulent differences divided the ranks of sangha, the Buddhist clergy.

Monks protest the coup in Yangon on February 16. Such spectacles were much more frequent in the first days after the putsch. © Reuters

“A singular premise of Buddhism is to alleviate suffering. Buddhists and non-Buddhists alike suffer tremendous suffering from violence, ”said Paul Fuller, a Buddhist expert at the University of Bath Spa in England. “It goes without saying that Buddhist leaders should voice their concerns to alleviate this suffering.”

But times have changed. Following a harsh crackdown on militant monks in 2007, the military courted, infiltrated and in part co-opted the monastic community, positioning itself as a defender of Buddhism against perceived enemies, especially the country’s Muslim minority. Even long before the coup, the military and some racist monks exploited a latent xenophobic tension among the country’s predominantly Buddhist Burmese ethnic majority to target Muslims and other minorities. An old ultranationalist slogan has been revived: “To be Burmese is to be Buddhist.

Community violence followed, culminating in 2017 with a ruthless military campaign against Rohingya Muslims in northern Rakhine State, which drove an estimated 750,000 refugees to neighboring Bangladesh.

Some prominent monks, along with thousands of lay devotees, tolerated the Rakhine massacres, describing Muslims as “mad dogs” and “cannibals” seeking to eradicate Buddhism, which accounts for around 90% of religious affiliations in Myanmar. . The hate speech of the monks has been compared by some to the demonization of the Jews by Hitler. Above: Buddhist monks march in protest against a UN appeal urging the Myanmar government to grant citizenship to the Muslim Rohingya, in Yangon in January 2015. (Reuters) Below: Protesters show their support for the Rohingya outside the Myanmar Embassy in Jakarta in September 2017 (Getty Images)

“Over the past decade, ties between the military and many Buddhist monks have grown stronger,” said Benedict Rogers, senior analyst at human rights group Christian Solidarity Worldwide, which focuses on religious freedom. and the defense of persecuted religious minorities. “Sadly, ultranationalist Buddhist monks either support the coup or at least feel divided loyalties.”

Before and since the coup, the military courted the sangha, renovating monasteries, organizing religious activities, and offering huge donations to favored monks. A favorite project of coup leader General Min Aung Hlaing has been the erection of a massive Buddha image in the capital, Naypyitaw, which state media say is the largest statue of that marble guy to the world. An elaborate ceremony at the site, attended by monks general and superiors, took place on March 26, a day after clashes in which troops killed nine protesters.

It is difficult to assess the proportion of monks who side with generals, those who avoid politics and those who are fiercely opposed to military rule. Of the more than 7,600 civilians arrested to date, only 29 were monks, according to the Independent Association for Assistance to Political Prisoners. Two were sentenced to prison terms.

Monks joined in some demonstrations, notably in Mandalay, the heart of Burmese Buddhism, which is home to around 80,000 monks. And the military takeover may have diminished – at least for now – the power of extremist and xenophobic monks while fostering unity between Buddhist, Christian and Muslim opponents of the regime. 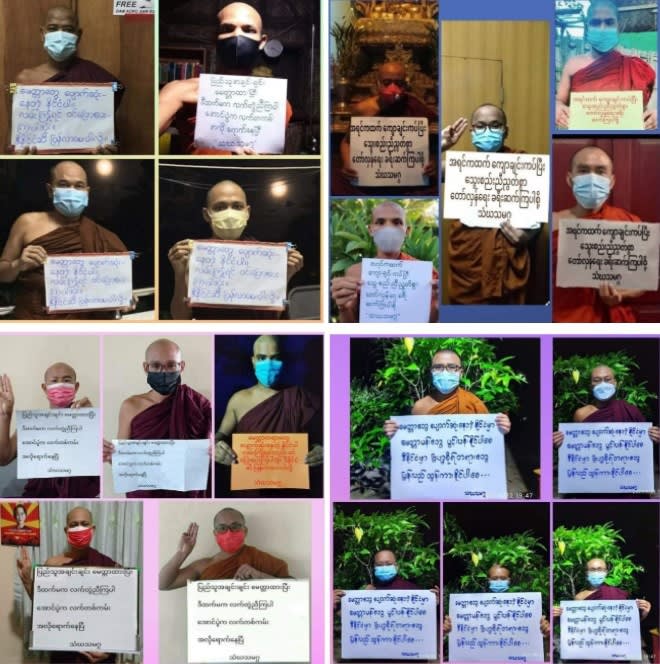 Above: Twitter screenshots show monks holding placards calling for the restoration of democracy in Myanmar. Bottom: Monks take to the streets in Yangon during the 2007 “Saffron Revolution” protests against military rule. (PA)

In an unprecedented move towards interfaith and ethnic harmony, a Christian minority Chin, known only as Dr Sasa, became a minister and key international spokesperson for the Government of National Unity, a parallel government formed by anti-regime activists.

“This military coup has weakened ultranationalists, anti-Muslim groups and their organizations because now people no longer believe in the propaganda of the army and its puppets against other races and religions,” Agga said. Wuntha, a prominent Mandalayan monk and protest leader, in Nikkei. Asia. The junta charged him with criminal offenses.

Speaking from hiding, Agga Wuntha of Seitta Thukha Padamya Monastery apologized to the Rohingya for not helping them enough during their ordeal. “Anyone who suffers from the brutality of the military, we feel that we are also suffering,” he added.

However, his feelings are not shared by other monks. Sitagu Sayadaw, one of the country’s most prominent monks, was once a fierce critic of the military, but has recently developed close ties with Min Aung Hlaing. The 84-year-old monk told military officers that violence against Muslims was justifiable. Buddhist Abbot Agga Wuntha holds up a protest sign saying, “Don’t ask what the UN and the US will do for us. Ask what you can do for your country. Then do as much as you can. This is how we can achieve our goal. (Screenshot from Twitter)

Kovida, another high-level religious leader, also has ties to the general and his wife, and offered the coup leaders astrological advice on how to implement the takeover, according to The Irrawaddy, a site of independent Burmese information. Seeking astrological advice is common in Burmese politics.

In March, the Sangha Maha Nayaka State Committee, a government-appointed body of senior monks, called for the violence to end. But he refrained from any criticism of the putschists. The committee, set up to regulate the sangha, has been used by the government to suppress the political activities of the monks and is made up of elderly traditional monks who enjoy many privileges.

The 47-member body did not invoke the ultimate moral rebuke against the military – Patam Nikkujjana Kamma, turning alms bowls – although some monks and laity have done so individually. By this injunction, the monks refuse to accept food and other offerings, thus denying the giver any religious merit that would flow from such an act. This form of excommunication is considered to protect Buddhism from threats and is an exception to the rule of non-involvement of monks in secular affairs.

Some scholars believe that the grassroots monastic community in Myanmar may be geared more towards the protection of religion than towards democratic ideals. A historical and symbiotic relationship with kings rather than elected rulers is rooted in Theravada Buddhism, the dominant branch in Southeast Asia. Anti-coup protesters clash with security forces in Yangon on March 16. A government-appointed group of senior monks appealed in March for the violence to end, but refrained from criticizing the military. © Reuters

“Is there a danger that the monks and their conservative and popular Buddhism will hamper democracy? Fuller asks. “This is why the important messages in the protests come from the younger generation, ‘Generation Z’, who operate across religious cultures, and accept that a genocide against the Rohingya has taken place.”

The monks who have resolutely chosen the pro-democracy camp, many of whom are also members of the younger generation, are as vulnerable and courageous as any protester. If earlier methods are followed, monks are stripped of their robes after being arrested and then referred to only by their lay names. All are at risk of torture, according to opposition activists and some released prisoners.

“We don’t know when the military will kiss us or torture us,” said Agga Wuntha. “We live in fear,” the monk adds, warning that the army’s actions are pushing Myanmar into civil war. He pleads for international support, but a protest sign he carried read: “Don’t ask what the UN or the US will do for us. Ask what you can do for your country. Then do it. as much as you can. This is how we can achieve our goals. “

The military is adept at divide-and-conquer strategies, but Rogers believes there is room for optimism because the coup sparked a vision of a multi-ethnic, multi-religious democratic future for Myanmar, uniting the people. in a “new and perhaps profound way.” . “

The fight against the coup is still in its early stages, and the monks could still emerge as a powerful force, despite their divisions and overall passivity so far. Sylwia Gil, a Polish Buddhist expert, notes that after Cyclone Nargis, which killed more than 90,000 people in 2008, the sangha was the first organized group to step up aid to survivors.

Stacey Abrams kicks off nationwide tour ahead of 2022 mid-sessions